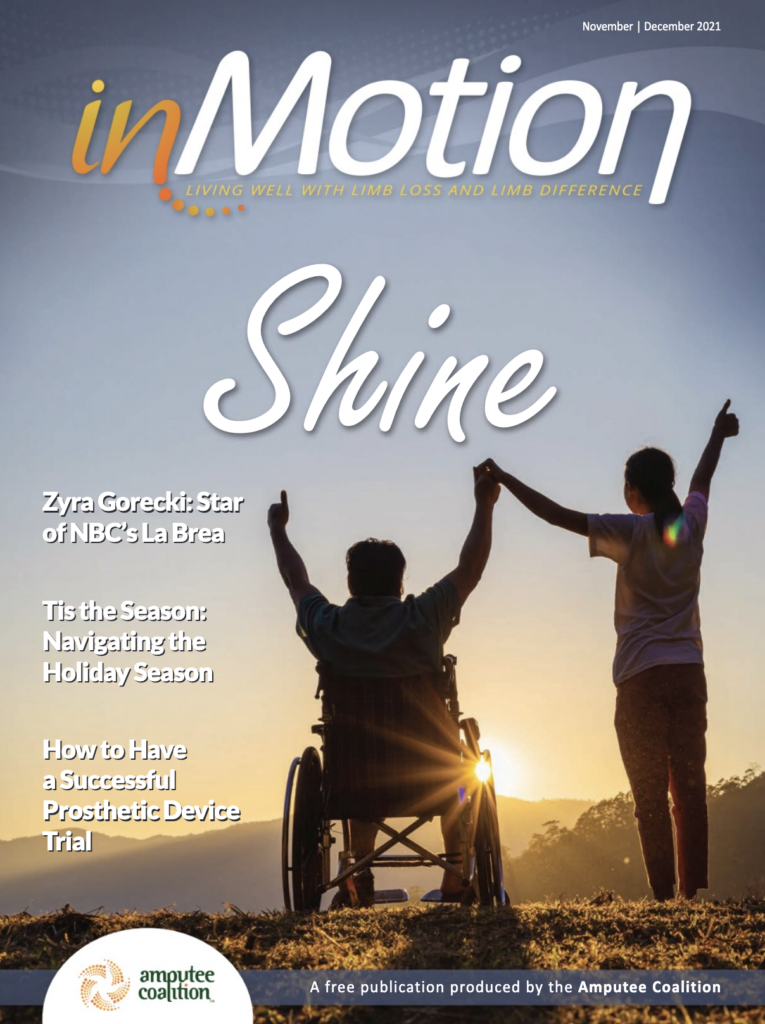 Looking Forward The Man with Eight Pairs of Legs: Why I Became a Disability Advocate

Body memory fascinates me. The ways we are marked by our pasts, literally, on our skin – bruises, scars, tracks, tattoos, and invisibly – genetic memory of genocide over generations, phantom limbs. My debut collection of eight short stories, The Man with Eight Pairs of Legs explores these themes.

The title story is about the unexpected encounter between a tall, thin high school history teacher, Harriet, who hates her body and Callahan, a bilateral AK amputee who aims to compete in a track race at the county fair in her small Colorado town in 1999. Nico Marcolongo, Senior Manager of Operation Rebound, writes: “This is a great story about the love of challenge and the challenge of love.”

But there was also the challenge of writing about a main character who is a double-amputee. I am an able-bodied fiction writer, so why did I make that choice? Perhaps the seed of this short story was planted when, at 20, I had a bad car accident in Italy. I was thrown out of the car, which rolled over and landed on top of me, my body jack-knifed in a ditch. I broke my pelvic bones on the left side, two ribs and an ankle, and was laid out in a hospital in Florence for two months. I had been a sprinter on my varsity track team in high school and was a trained modern dancer.

Alone in a hospital, so far from home, I didn’t know if I would ever be able to walk again. But I did heal, moving from a wheelchair to crutches to walking on my own. I also fell in love with the Italian man I had been driving with – he came to visit me in the hospital every day, his smile warm and reassuring as the sun coming up when he walked into the ward. But that’s another story…or is it?

Fast forward a few decades. After years of hiking, dancing, and jogging on concrete for miles with my dog, I was diagnosed with post-traumatic arthritis in the left hip. Looking at the x-ray, the doctor said I should be in excruciating pain. I was not (after a steroid shot). And did not want a hip replacement. I used a cane for a year, built up my core and the surrounding muscles, and, with some limits – I don’t sprint! – have carried on.

Shortly after this diagnosis, I saw a TED talk, by chance, of Aimee Mullins speaking about and displaying her twelve pairs of amazing prosthetics. Like a lightning bolt, my own experience of physical trauma and the stunning visual image of Aimee’s legs came together, inspiring me to write the short story, The Man with Eight Pairs of Legs.

A brilliant teacher said two key things that helped me move the story forward when it was in an early draft:
1. Make the story about Callahan and Harriet, not about the race at the county fair, and
2. Get them into a room as soon as possible and see what happens! He floored me when he asked me if I had the guts to go there. Perhaps I didn’t, but I got them alone in a room anyway, and slowly but surely the story unraveled and grew over the next six years.

A fiction writer’s job is to be able to imagine being almost anyone but to write about someone different than her, she needs to listen and learn. I looked up every article I could find online about limb loss. I watched dozens of videos of bilateral amputees learning to walk, getting up from sitting and lying down, putting on and taking off their prosthetics. Once I felt I had a strong enough draft, I reached out to the Amputee Coalition. I wanted to be sure Callahan’s portrayal, though fictional, felt authentic and true. Andrew graciously emailed me contacts. One of these was Nico Marcolongo at Challenged Athletes Foundation in San Diego, who was off-the-charts enthusiastic and encouraging. He immediately agreed to read the story and pass it along to Paralympic athlete Rudy Garcia Tolson. My heart was pounding when they both gave the story a thumbs up! And then thrilled, a couple of years later, when Ploughshares, an esteemed literary review, chose to publish it. The story came out on 10/13. I believe a writer always writes what she, and she alone, needs to write. I call this the writing faith. The soul of this love story arises from my own body memory (broken bones, physical pain, and healing); from psychological issues, I, too, have struggled with: body image, intimacy, and self-esteem; and questions about the human condition that fascinate me: is there a difference between visible and invisible suffering? do artificial enhancements make us more or less human? is it possible to love deeply across difference?

Writing about Callahan, learning more about the experience of living with limb loss, has inspired me to get involved in Amputee Coalition’s excellent advocacy program. I am just starting but look forward to being one more drop in the ocean that will make a difference.

This is an article I wrote for the November/December 2021 Issue of inMotion, the magazine of the National Amputee Coalition. Here’s the link to the published article.

← Why Did I Write This Quirky Love Story?Rauschenberg, Rejection, & Being True To Your Own Heart →